Crystal Embellished Sunflower Impasto Painting
We're now at the Coastal Carolina Flea Market in Ladson SC on aisle B-South every Saturday and Sunday! We have our crystals and more available there that aren't on line. We'll see y'all there! 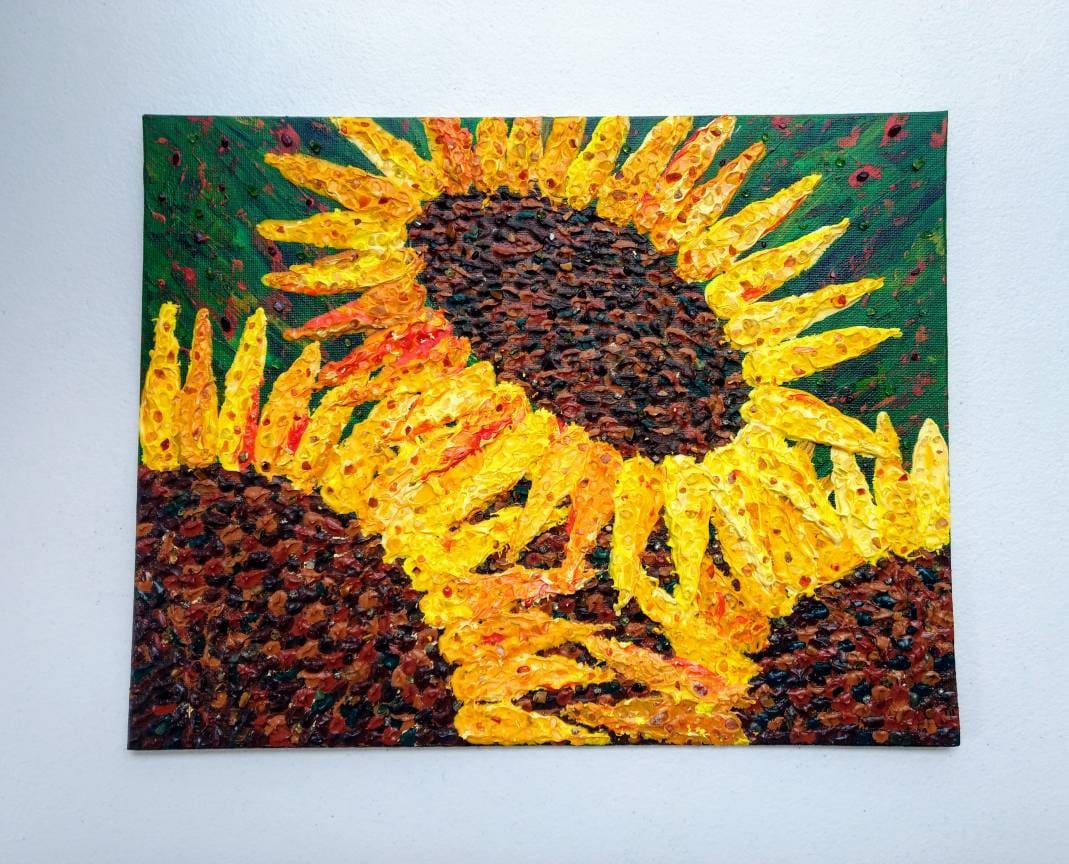 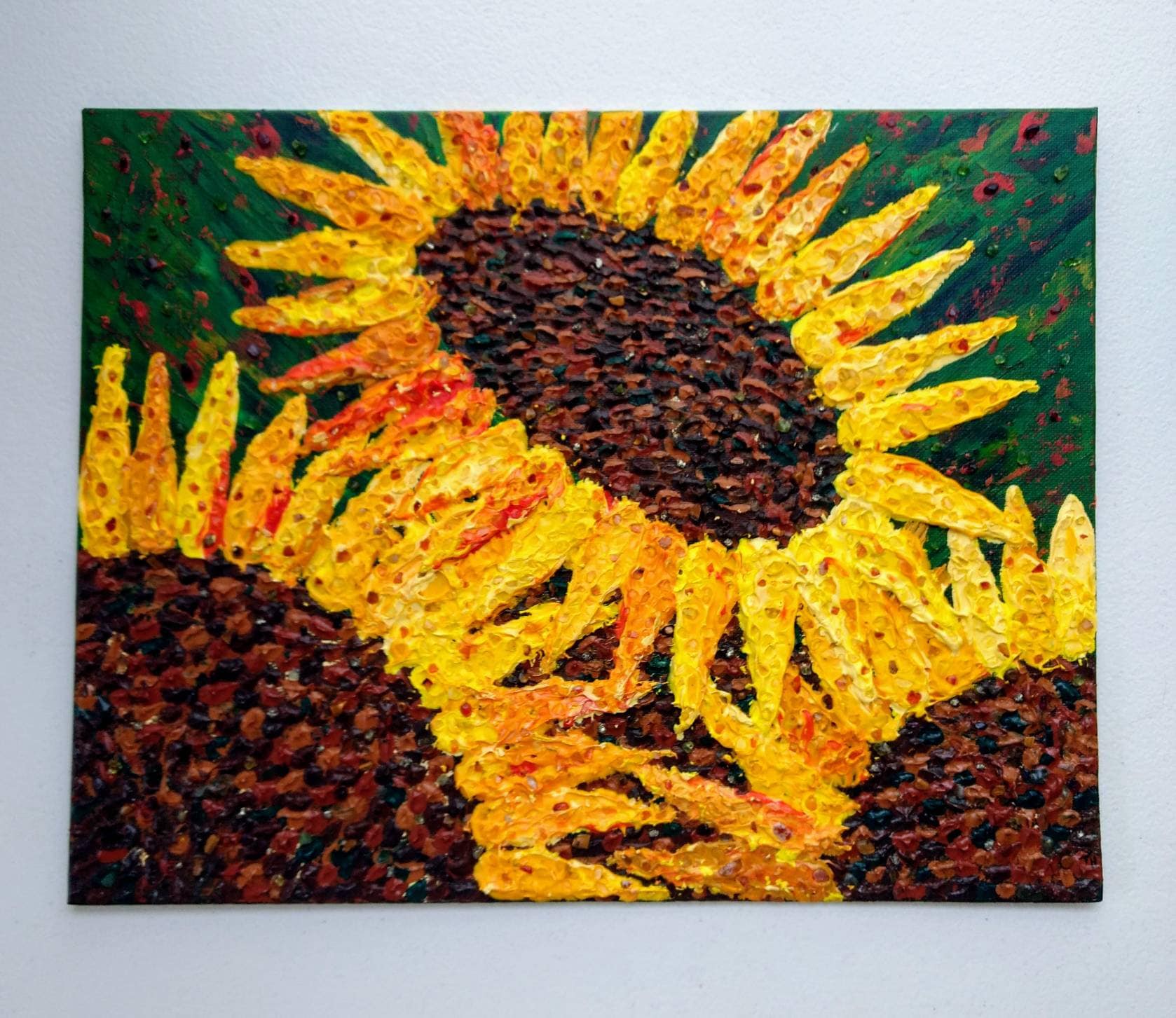 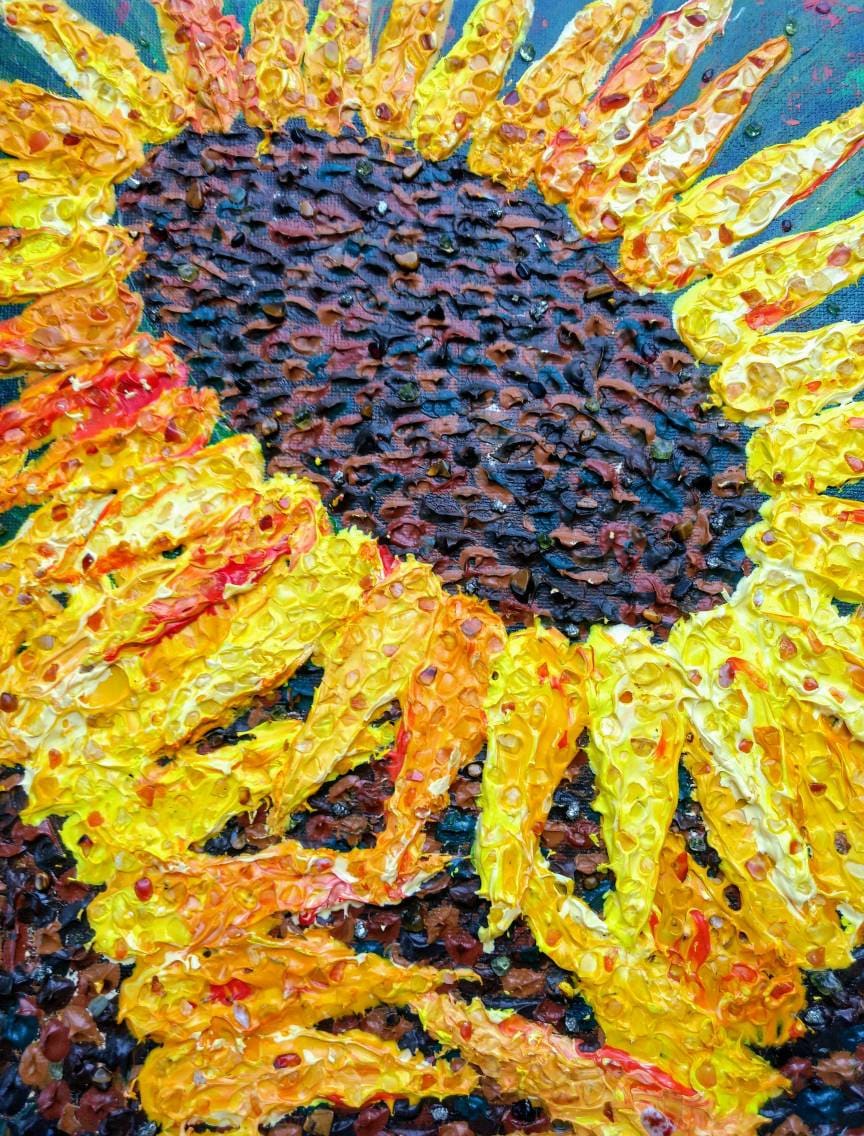 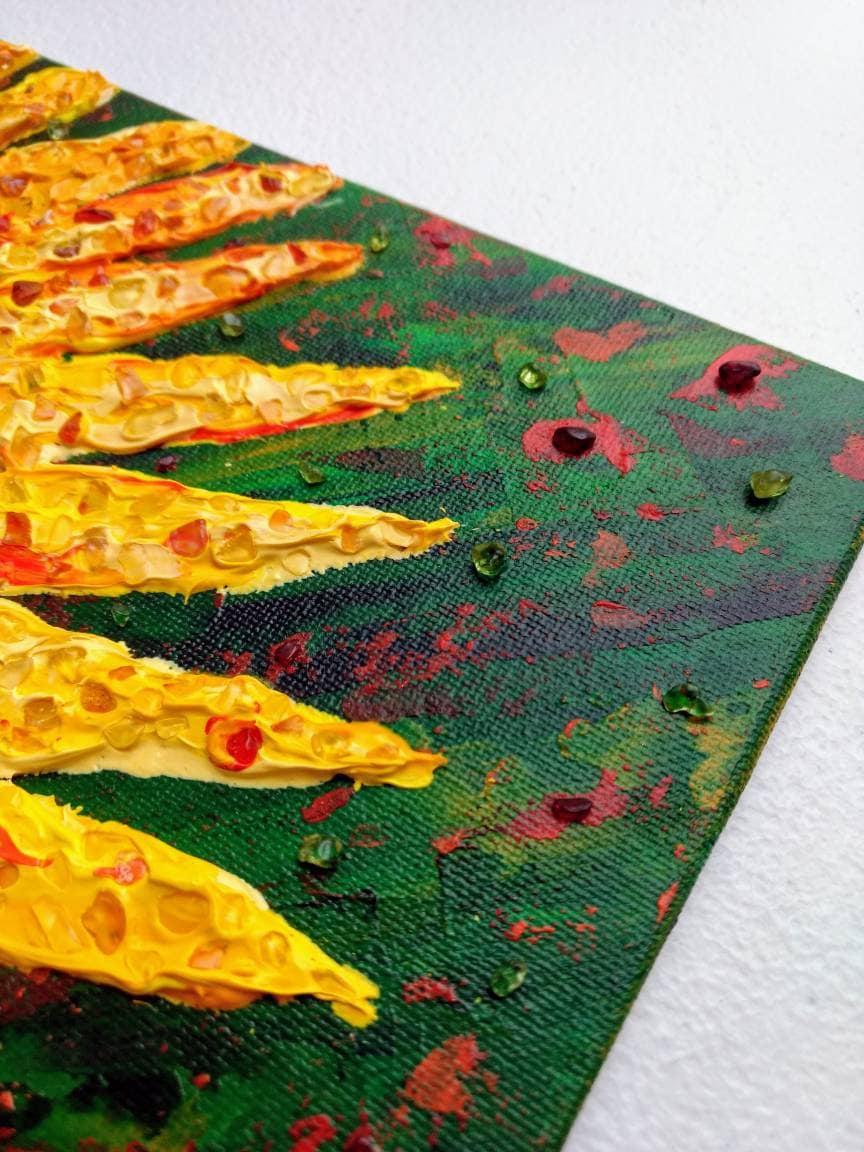 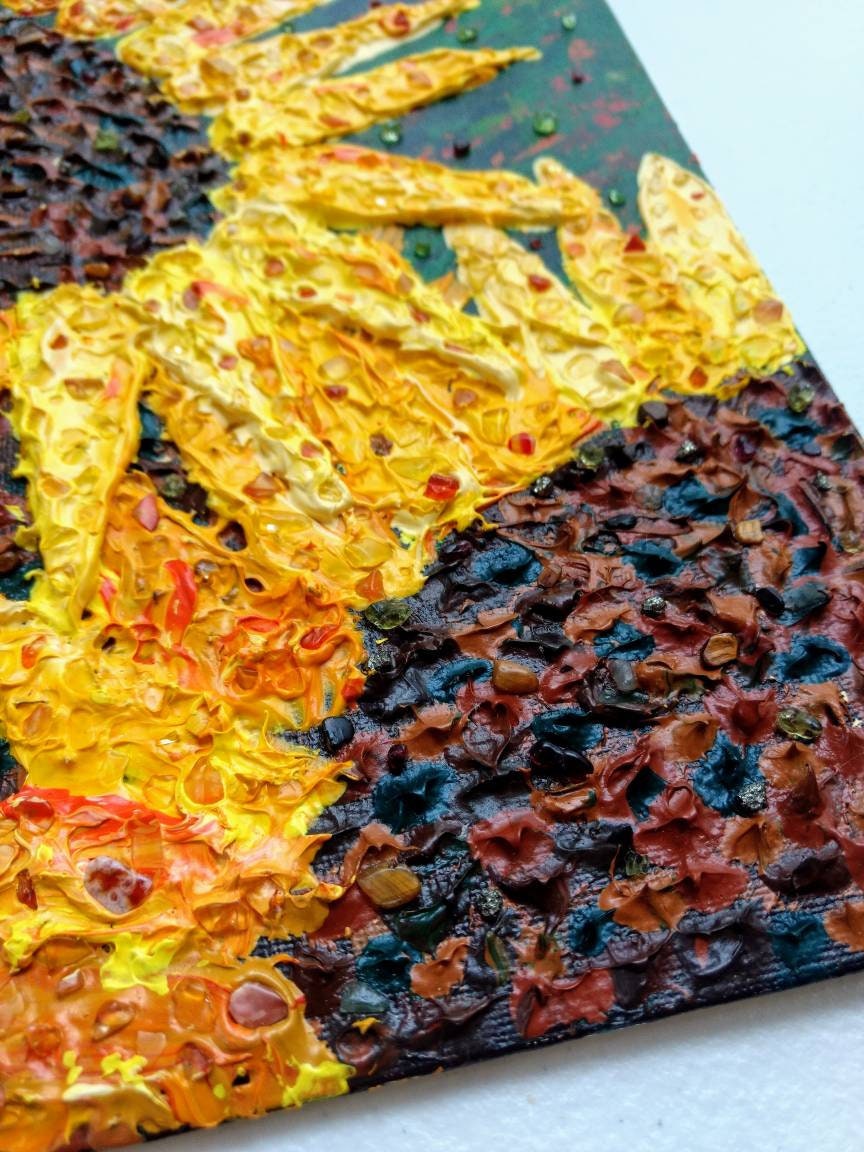 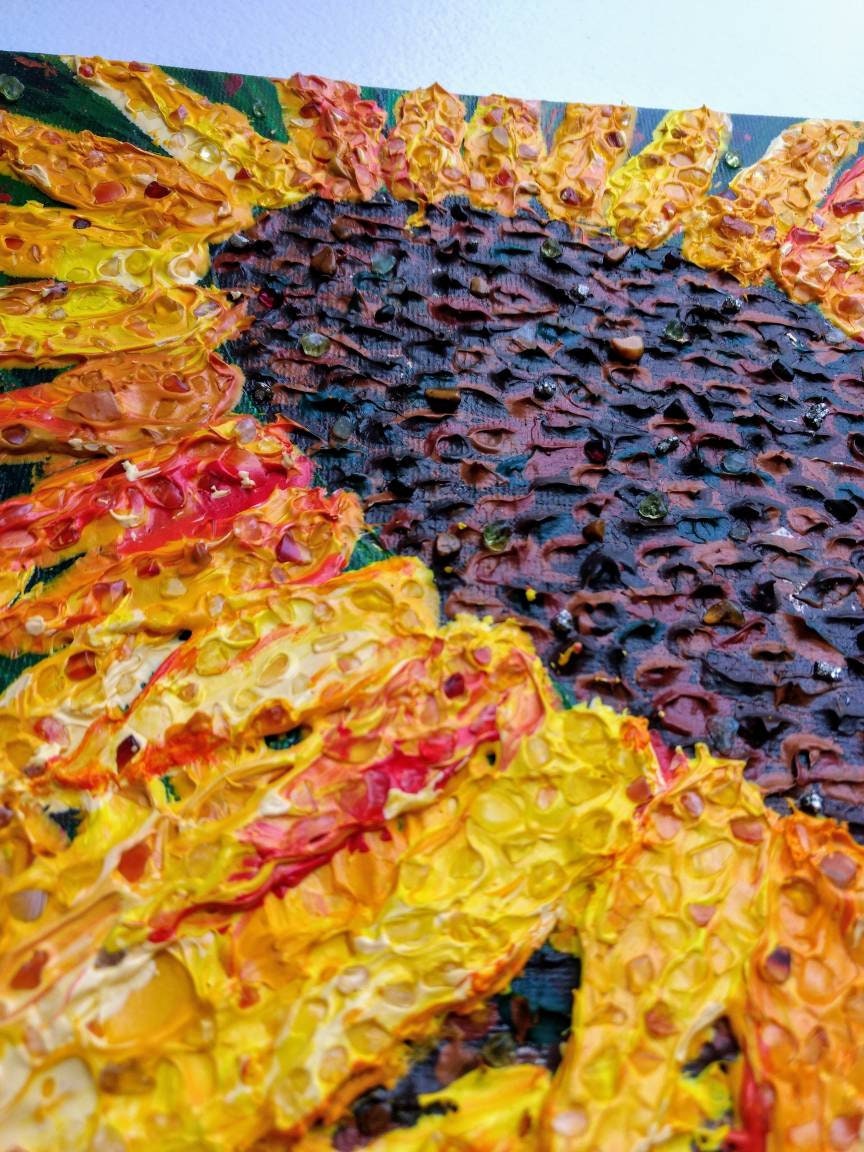 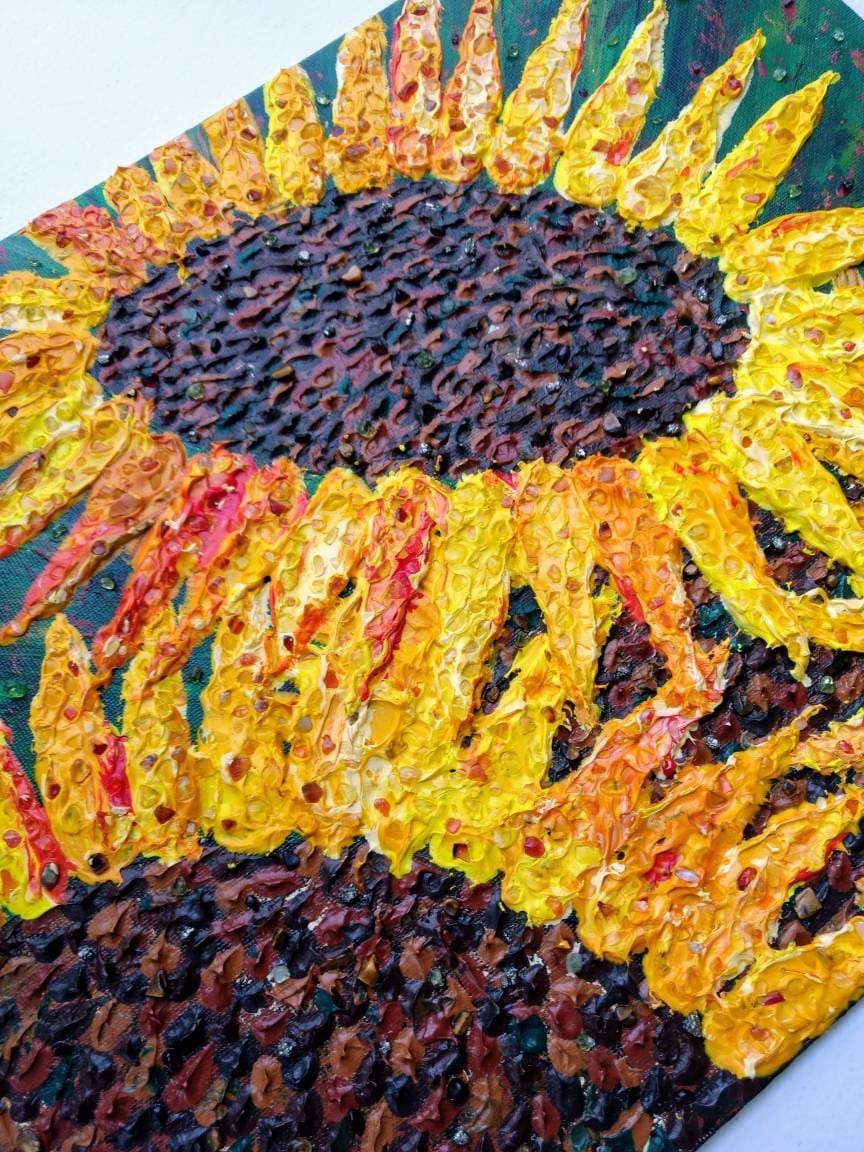 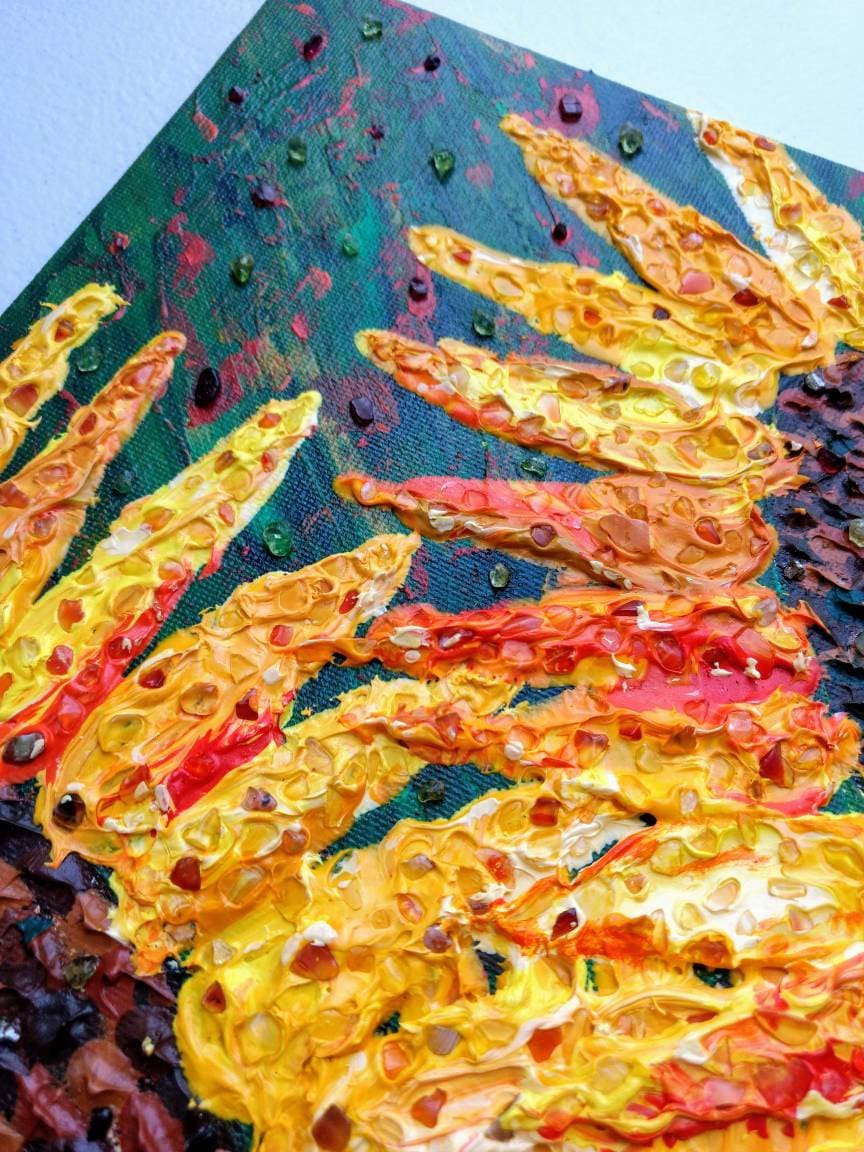 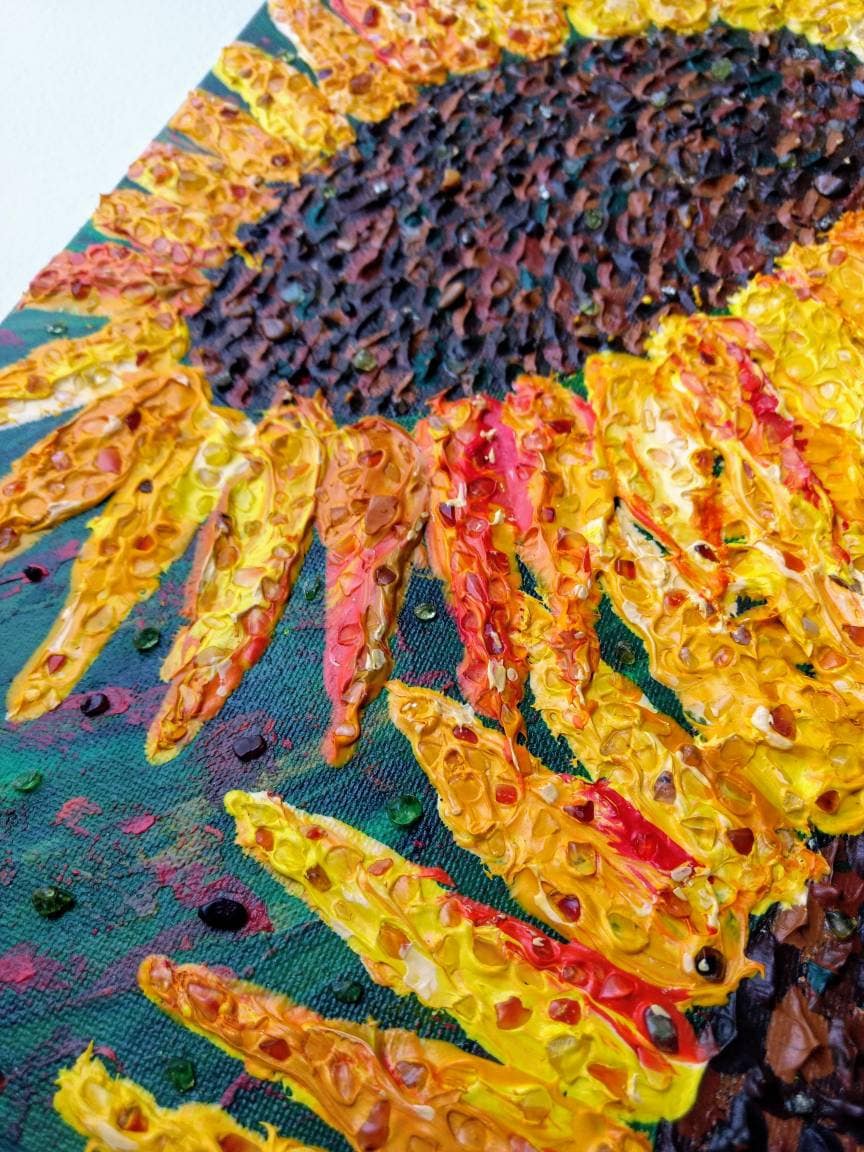 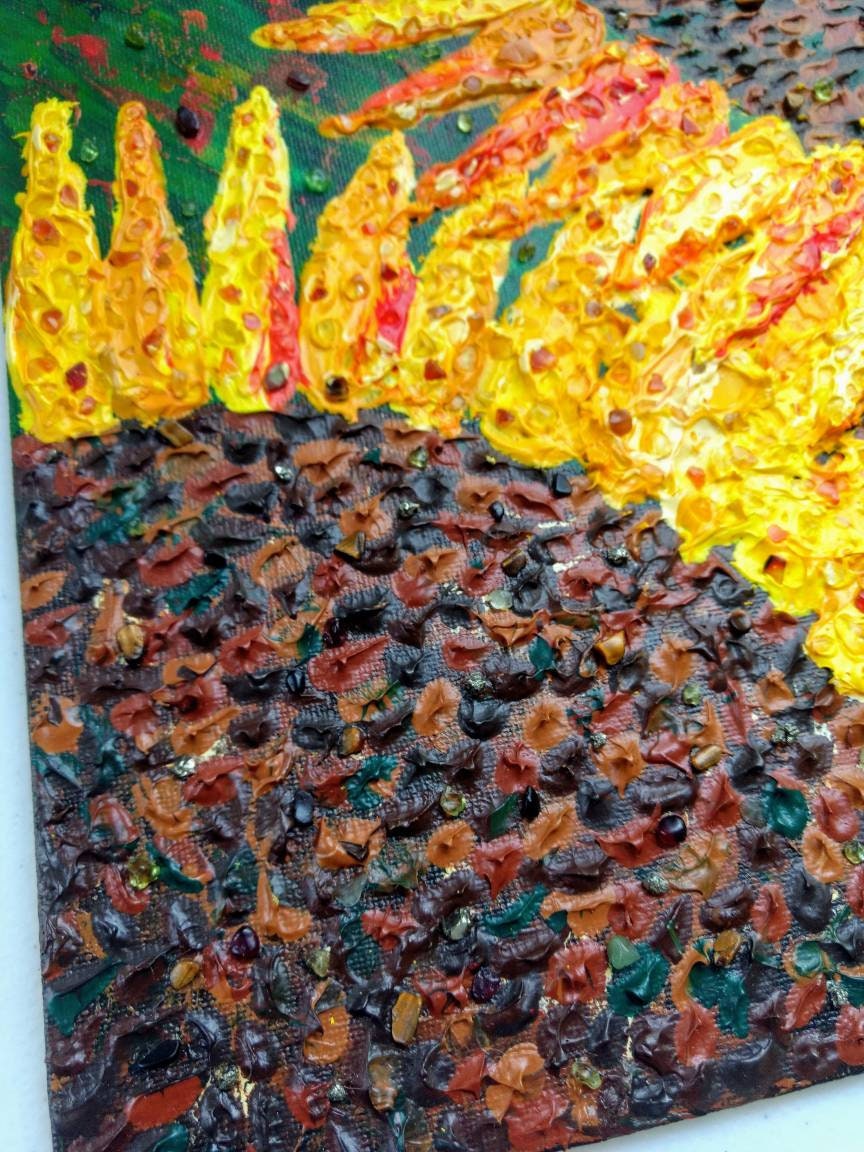 This is a beautiful one of a kind impasto style acrylic Sunflower Crystal embellished painting on a 14x11 inch canvas board. I painted it with both palette knives and brushes. I embellished it with Pyrite, Citrine, Onyx, yellow Tiger's Eye, Garnet, red Agate, green Aventurine, and Peridot crystals to bring their wonderful healing energy to your space along with the lovely sunflowers. Most of these crystals are great for grounding and the lower three chakras, and the Aventurine and Peridot are awesome for your heart chakra. This painting would be great to assist you in your meditations. Please see the stone descriptions below for more information on some of their benefits. Interesting side note, the Citrine will 'energetically cleanse' all the other stones because they are all together. It's ready for you to display by framing it (without glass covering it), displaying on an easel, or hanging without a frame with command strips. Please be aware that colors and tones can look different depending on the device you're viewing the pictures on.

Pyrite - Sacral & Solar Plexus Chakras; Pyrite is known to be masculine in nature, a stone of action, vitality and will. Said to tap into one’s abilities and potential, stimulating a flow of ideas. It's said to bring confidence and the persistence to carry things through to completion. Pyrite is known to be a unique protector, drawing energy from the Earth through the physical body and into the aura creating a defensive shield against negative energies, emotional attack, physical harm, and environmental pollutants. It's also said to support one with a spirit of boldness and assertive action when protecting others, the planet, or in standing up for important issues of community. It's known to stimulate the Second and Third Chakras to enhance will power and the ability to see behind facades to what is real.

Citrine – Solar Plexus Chakra; Citrine is a variation of quartz that has long been referred to as the “merchant’s stone”. It is popular for its ability to help bring abundance into our lives, whether it is financial or spiritual. Citrine resonates with the golden energy of the solar plexus chakra, our power center. This crystal supports a healthy ego as well as a balance between pride and humility. Citrine's yellow-orange hues bring a unique sense of excitement to its wearer. Historically used to help relieve depression. Is said to be a premier stone of manifestation, personal will, and imagination. It's known to stimulate the chakras, clearing the mind and stirring the soul to action. It doesn't hold or accumulate negative energy, but rather transmutes, dissipates, and grounds it. This makes it extremely protective for the environment. Known to transform negative thoughts and feelings into positive ones. It is one of only two crystals that never needs to be cleared or cleansed (the other is Kyanite).

Black Onyx – Root Chakra; Black Onyx is historically known to assist with challenges in life, especially those caused by a drain of energy. It's said to prevent the draining away of personal energy and can be used for protection from such. It's also know to help with grounding and controlling/eliminating excess/unwanted energies. It has been historically used for wound healing, childbirth and to increase stamina and self-control.

Yellow Tiger’s Eye – Sacral & Solar Plexus Chakra; Tiger's Eye is said to combine the earth energy with the energy of the sun to create a high vibrational state that is still grounded. It is known as a protective stone. It is also said to balance yin-yang, to alleviate depression, and lift moods.

Garnet – Root Chakra; Garnet is a highly regenerative stone that balances its wearer and offers a certain level of protection. It was commonly used as an aid in war, its blood like color leading the ancients to believe that it would protect them from being badly wounded in battle. Garnet is also believed to be a sort of “transmuter” of energy. It pulls low-vibrational energy from the chakras and alters it, returning only high vibrations into the chakra system. In this way, garnet regenerates our energy system and allows deeper spiritual and emotional healing to take place.

Red Agate – Root, Sacral, & Solar Plexus Chakras; Red Agate, as a stone of the lower chakras, is said to be helpful in the more physical aspects of our lives. Historically known to bring peace and calmness. Interestingly, it's also said to drive away spiders. It is rumored to be helpful in preventing theft of personal property and in dealing with blood disorders. Like most agates, red agate is a grounding stone with a strong connection to the Earth energies that we often lose touch with as we go about our daily lives. Red agate can assist you in getting in touch with the foundation of who you are.

Green Aventurine – Heart Chakra; Green Aventurine is historically known to comfort, harmonize, and protect the heart. Said to help attract love later in life. It's noted as the stone of prosperity or opportunity and is considered to be one of the luckiest of all crystals to work with. Those who wear it may find that situations begin to align in their favor. While green aventurine resonates with the lovely green energy of the heart chakra, it also has a deep connection with the Earth’s energy and can help its wearer gain a stronger appreciation for this planet we call home. It has a soothing energy, and is recommended for working through unresolved emotional issues. Commonly known as a “stone of personal growth.” Said to offer opportunities for learning about yourself and your place in the universe. Physically it's known as an all-around healing stone.

Peridot - Heart & Solar Plexus Chakra; Peridot is known as a powerful cleansing stone. It was believed in ancient times that it kept away evil spirits. It's said to release burdens, guilt, old baggage, and obsessions. Known to open, cleanse, and activate the heart and solar plexus chakras.

*Once a piece is sold I cleanse it with Reiki (Gods healing energy) with the persons name who purchased it in mind to clear out any negative energy attached to it, recharge it, and prepare it for the new owner. If you are purchasing it as a gift feel free to let me know that persons name when you purchase it and I will do this process with them in mind. Once you receive your piece you can cleanse it energetically as needed yourselves with sun light or water. If you aren't familiar with this practice of cleansing crystals please just look it up online to get more information. You'll find plenty of help with how and why to do this.

Disclaimer: The stone information provided is to give you a general idea of what each one is historically know to do. I suggest that you research into them yourselves for a deeper understanding. A simple google search will bring you tons of information. This is not to substitute a doctors care.

Ship items back to me within: 14 days of delivery

I don't accept exchanges or cancellations

But please contact me if you have any problems with your order.

The following items can't be returned or exchanged

Because of the nature of these items, unless they arrive damaged or defective, I can't accept returns for:

0 items in your cart